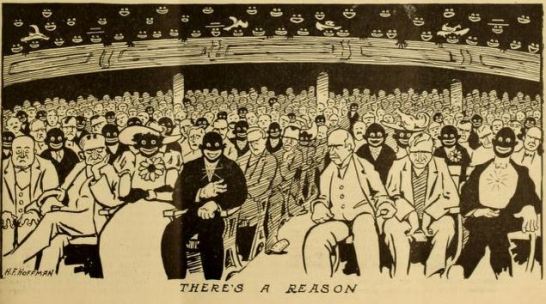 Comments: H.F. Hoffman was an American film lecturer, cartoonist and occasional writer for Moving Picture World. This cartoon appeared at the time when the film of the world heavyweight boxing championship won on 4 July 1910 by the black Jack Johnson against the white Jim Jeffries was causing great controversy across America – because it showed a black victory, because prizefighting existed in a semi-illegal status, and because the result had been so popular among the black community. Hoffman’s point in producing the cartoon appears to have been to argue for continued segregation of theatre audiences along race lines. The audience in the stalls are desegregated, which those in the balcony are all black (the standard arrangement for accommodating black audiences in the American south at this time). A report on the Johnson-Jeffries fight film on the opposite page to this cartoon reinforces the likely connection.