Text: One night I had a severe cramp in my stomach and Nora prayed ‘O my God, take away Jim’s pain.’ The other evening we went to a bioscope. There were a series of pictures about betrayed Gretchen. In the third last Lothario throws her into the river and rushes off, followed by rabble. Nora said ‘O, policeman, catch him’.

Comments: James Joyce (1882-1941) was an Irish novelist and briefly (December 1909-January 1910) a cinema manager. In 1904, while he and Nora Barnacle were living in Pola (now Pula) in what is now Croatia but was then part of Austria-Hungary, they went to a travelling film show, possibly the ‘Bioscopio elettrico’ managed by Carlo Lifka, which was located close to the Berlitz language school where Joyce taught. The reference to Gretchen and Lothario is probably generic rather than a specific film with those characters. Stanislaus Joyce was his brother. 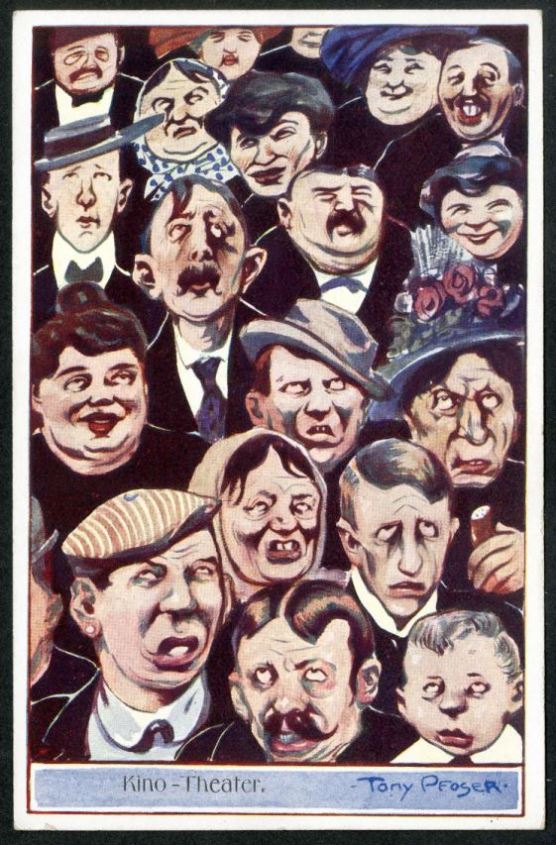 Comments: Tony Pfoser was an Austrian (or possibly German) caricaturist. The postcard, which was printed in Austria, shows a cinema audience from the screen’s point of view.

Was at the movies. Wept. Lolotte. The good pastor. The little bicycle. The reconciliation of the parents. Boundless entertainment. Before that a sad film, Catastrophe at the Dock, after the amusing Alone at Last. Am completely empty and meaningless, the electric tram passing by has more living meaning.

Comment: Franz Kafka (1883-1924) was an occasional cinemagoer in the early 1910s. His fleeting references to film, combined with fuller accounts by his friend Max Brod, have been collated and analysed in Hanns Zischler, Kafka Goes to the Movies (Chicago/London: University of Chicago Press, 2003). Zischler identifies the films to which Kafka refers as being L’Enfant de Paris [i.e. Lolotte] (France 1913), Katastrofen I Dokken (Denmark 1913) and Endlich allein, oder Isidors Hochzeitsreise (Germany 1913). Kafka lived in Prague, then part of Austria-Hungary.