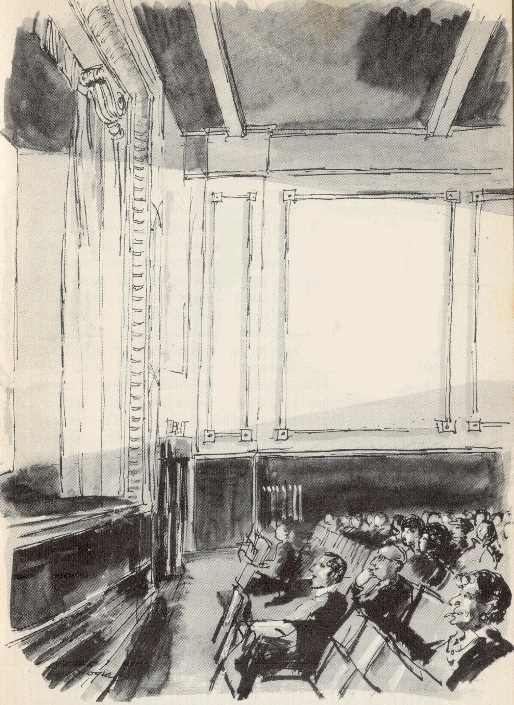 Text: Early cinemas of the Edwardian period and up to the Great War occurred in all the London suburbs; these, often family owned, have been less able to stand up to the competition of television than the larger circuits, and consequently many have disappeared or else been modernized and spoiled like the Classic in King’s Road, Chelsea. Many of these cinemas were of a delightfully ham-fisted Baroque, with fat Tuscan columns that appeared to be in danger of being squashed by the loads that they supported. This exaggerated entasis was equalled by an exaggerated abundant decorations – swags, festoons, and the like carried out in stucco or terracotta. I have never been fortunate enough to find a Gothic cinema, though Tudor-style ones occurred. Cinemas followed the pattern of shapes evolved by the theatre and were naturally built in the prevailing style of the day, i.e. Edwardian Baroque, redolent of Imperial expansion and big cigars. Fortunately the earliest cinema in London – the earliest in the country, in fact – still survives in Wilton Road, Victoria – the Biograph, originally the Bioscope. My drawing of it is reproduced on p. 113. Pimlico people have been ‘going to the Bio’ since it was built in 1905 by an American, George Washington Grant. The Bio still has its classical façade, and apart from changes in the equipment, the only alteration was when the auditorium was enlarged, the new wall being a replica of the old. But the gas jets have gone and the commissionaires with heavy moustaches – gone like the horse buses that used to run along the Vauxhall Bridge Road. When my drawing was made, the customers were watching The Fiend from Outer Space instead of Mary Pickford as the little slavey with a heart of gold.

Inside, two Corinthian columns (illustrated at the head of this page), wallpapered with Anaglypta below, support the projection box, the width of which is that of the cinema in 1905. Below the ‘ceiling’ formed by the box runs and Edwardian egg and dart moulding – a typical early cinema decorations. In the foyer a framed copy of the Biograph Weekly News, distributed gratis. This forms rich reading at the present day. The issue in the frame is that for the week commencing 16 September 1929, and has the headline: ‘Talkies Coming Here!!’ A letter from the manager announces ‘our first talking picture’ – Show Boat on 30 September. Elsewhere in the paper a newsy item states that ‘workmen were labouring day and night to bring you the greater talkies as soon as possible’. Other forthcoming attractions of that period included William Boyd in The Cop and a supporting film called The Mystery of the Louvre. Betty Balfour was to appear in Paradise and Rin Tin Tin in The Million Dollar Collar. Prices were 2s., 1s. 3d., and 9d., children at reduced rates, ‘special children’s matinee 4d.’ (I remember those children’s 4d. matinees; how noisy they were and the way the films rained! And those serials, ending each installment on a fantastic note of drama – the heroine hanging by her finger-tips over a well of crocodiles. The week which had to elapse before her fate could be known was unendurable, but next time she simply had got out, one never knew how, and we were building up to a new crisis even more hair-raising than last week’s dilemma.)

Comments: Geoffrey Fletcher (1923-2004) was a British artist and illustrator, best know for his elegiac 1962 book The London Nobody Knows which was turned into a documentary film in 1967. However, the Biograph was not London’s oldest cinema, nor the country’s oldest, nor was it founded in 1905 – and it was never known as the Bioscope. It was founded in June 1909 as one of the Electric Theatres (1908) Ltd chain. It changed its name from the Electric Theatre to Biograph at some point in the 1910s. As Allen Eyles and Keith Skone point out, in their London’s West End Cinemas (1984), the mistake comes from a wholly erroneous plaque displayed in its foyer. The Biograph closed on 4 August 1983. There was no film entitled The Fiend from Outer Space (possibly he may be thinking of the 1958 film Fiend Without a Face).