Text: At the Clerkenwell County Court, on Tuesday, Robert William Paul, of 44, Hatton-garden, inventor and patentee of the “theatrograph,” and well known for his exhibitions at Olympia, Earl’s-court, and the principal music halls, was the plaintiff in an action to recover from “Wonderland, Limited,” a music hall company conducting their business in Whitechapel-road, £22 10s., three weeks’ rent of electric accumulators supplied to the defendants on hire. The defendants counterclaimed for £15 damages. Mr Gill, barrister, was for the plaintiff; and Mr Dodd, barrister, for the defendants.

The plaintiff’s case was that in April last he was engaged by the defendants, through their managing director, Mr Jonas Woolf, to give performances with his theatrograph at “Wonderland.” For these the plaintiff was to receive £20 a-week, in addition to £7 10s. a-week for supplying accumulators on lire, the defendants to provide the electric current. The plaintiff exhibited for three weeks, and was paid his salary, but had received nothing for the hire of the accumulators.

The defendants admitted their indebtedness for two weeks only. In support of their counterclaim they alleged they had bet heavily through the neglect of the plaintiff, whose performances were a complete failure. It was his duty to provide the electric current, but he had not done so, contenting himself with the use of weak batteries obtained from the defendants, and afterwards of limelight apparatus. The result was that the illusions presented by the “Theatrograph” were blurred and indistinct. The audience, it was said, used to hiss the performance, and many people had demanded and received back their money. The “Theatrograph” was the “star attraction” and, owing to its failure, the takings of “Wonderland (Limited)” fell in one week from £128 to £73, and in the next to £58.

Mr Gill (to Mr Woolf) – You say the “Theatrograph” was your star attraction, and that the losses of your music hall were due to its failure? Witness – The rest of the programme was mere padding.

Mr Gill (reading from a poster) – Do you call the Bear Lady padding – “A native of Africa, full grown, whose arms and legs are formed in exactly the same manner as the animal after which she is named?” Witness – Yes, the Bear Lady was padding.

Mr Gill – I am not surprised that these monstrous exaggerations damaged your business. It was not the theatrograph.

Judge Meadows White held that it was the duty of the defendants to have supplied a proper light, the absence of which had caused the failures of which they complained. He gave judgment for the plaintiff, with costs, and disallowed the counter-claim.

Comments: Wonderland was an entertainment venue in Whitechapel in London’s East End. It was best-known for hosting boxing bouts, but included other kinds of entertainment, including the Theatrograph projector of British inventor Robert Paul, whose poor reception in April (two months after its public debut) Clerkenwell County Court decided was due to poor illumination from the venue’s accumulators, at a hearing on 14 July 1896. 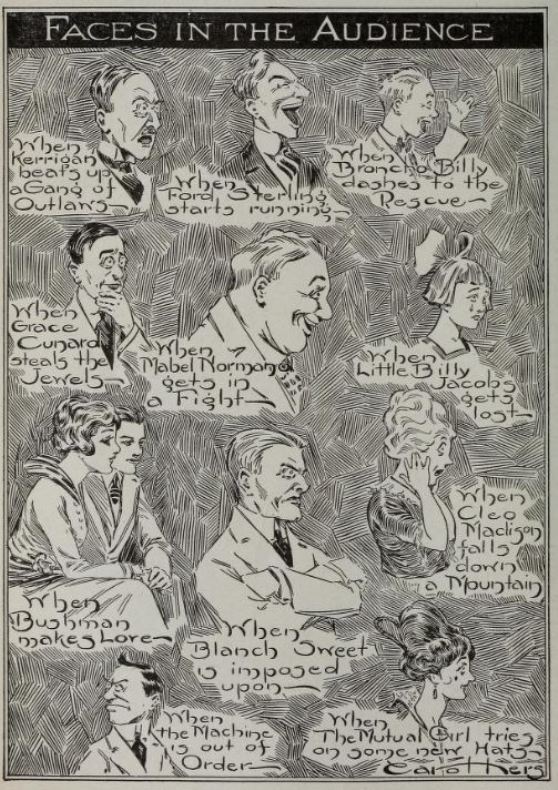 Text: During the 1960s I often used to spend summer holidays with the Nadal family in Cadaques. My father and Angel Nadal collaborated at the time on the Buster comic strip: Dad wrote the storyboard and dialogue and posted the sketches to Angel who applied the artwork at a desk on the balcony of his apartment, fishing rod to hand. His eldest children, David and Ana were a little younger than me and had a large circle of friends whose families typically resided in Gerona or Barcelona for most of the year but escaped to the Costa Brava villages during the summer months. Talk between us kids was mostly about pop, heard intermittently over the radio: I taught them ‘A hard day’s night’ and the English words to ‘Amarillo el submarino es’ (Yellow Submarine). But we also talked about cinema.

General Franco and the Church ensured that censorship remained tight. The Spanish children could sense that things were different and more exciting across the Pyrenees. A few years later this translated into queues at the border to see ‘Love Story’ while it was being shown in Perpignan. I was quizzed about the supposedly lurid details and caused them immense disappointment, and even more surprise, when I told them I hadn’t seen it and was not inclined to do so either.

Cadaques is a very special place, isolated for decades by the surrounding mountains from the interior. Artists loved it: Dali had a house in neighbouring Port Lligat. Film makers loved it too and I remember witnessing a scene being shot that I was told included James Mason, though I only saw the large car that brought him there. Social life revolved around the beaches during the day and the bars and casino during the evening: dancing sardanas on Sundays. Children largely made their own entertainment, fishing, playing games of tag or going on late afternoon hikes up the mountain. Spanish TV in the 60s was uniformly dreadful, replete with overdubbed American and British movies from previous decades.

So I was surprised one evening (in 1966 or 1968) when David and Ana said we were going to the cinema. They didn’t say which film: I was just curious about where the cinema might be. I have failed to remember exactly where it was but it was close to the imposing church and may have been in the church hall. The noise was unbelievable as we went in: a bare room, concrete floor and metal-legged chairs scraping or falling by the dozen as throngs of kids (I don’t recall seeing many adults present) joked, poked and generally misbehaved at the tops of their voices – illegally in Catalan. As soon as the lights were turned off and the projector warmed up the noise level dropped but then the fingers and occasional head silhouettes started to appear on the blank screen and the hubbub resumed.

The film was Las Minas del Rey Salomon (King Solomon’s Mines, 1950) with Stewart Granger and Deborah Kerr. I’d pretended to read the book at school so didn’t really know the story but was cross that the Spanish couldn’t get the King’s name right.

About ten minutes into the film the audience noise had subsided enough to be able to hear the dialogue, breathlessly dubbed in Spanish. Then the projector broke down, which it was prone to do regularly during that screening. The light went back on, the shouting and yelling resumed, this time levelled at the hapless projectionist.

I honestly cannot remember a single scene from that film: all I can bring to mind is the audience behaviour and the sonorous bareness of the venue. That was the only time I went to the cinema in Cadaques.

Several years later, just before and while studying Spanish at university, I went to several cinemas in Barcelona. The cinemas in central Barcelona were then, as you’d expect in a cosmopolitan centre, high class establishments and the experience was similar to an evening out in London or Paris. But out in the suburbs the experience could be closer to that evening in Cadaques. People came in and went out of the cinema when they felt like it: our group of about six lads arrived late for El Graduado (extensively cut, I later realised) and so we sat through part of the next showing to catch the opening scenes we’d missed. I decided I needed to see it again so took the bus down the hill to a small cinema next to Plaza Lesseps, which was more bar than cinema. The film was shown in two parts, so after more booze the audience was even more prone to participate during the second part than in the first. I had to wait a couple more years before I could see it properly, in the original, uncut version, on the telly back home.

Comments: Christopher Clark (born 1952) is a musician and former sound archivist at the British Library. His father was cartoonist and film animator Ron ‘Nobby’ Clark. He adds: “I’ve always enjoyed going to the cinema, ever since my Dad took me to the cartoons at Victoria Station to fill in time before our train departed. I knew from matinees in my home town of Horsham that a cinema full of kids was prone to occasional disturbances but in all my childhood years of half-term Disney first releases and westerns I can’t remember any noise above the occasional rustle of sweet papers intruding on the film’s progress. Spain was indeed different.” The films mentioned are Love Story (USA 1970), King’s Solomon’s Mines (USA 1950) and The Graduate (USA 1967).

Text: What flicks they were in those days. Not only did they flicker, but they whirred. The pianist was usually thumping away too loud for you to hear the film running over the sprockets; but when the love scenes came and the piano went soft and mushy, then the projectionist came into his own. Every time Rudolph Valentino narrowed his eyes and the heroine shrank from him in mingled love and loathing, then, just as surely as the next caption would be ‘I Love You!’ and the one after would be ‘No, No!’, so without fail would be heard the whirring, chirring rattle of the projector.

Sometimes the machine broke down. When that happened the whole audience, Aggie and me included, would groan loudly; then, as the lights came on, we would all laugh and applaud ourselves for being such audacious wags. After a few minutes the lights would be turned out again to renewed cheers and whistles. The whirring started up once more, a few feet of film jerked onto the screen – only to suffer a further collapse. Louder groans from the audience: more ribald cheering. No one ever made a fuss or complained about breakdowns; they were accepted as part of the entertainment. You paid your money, you came out of the cold and rain, and whichever way things went you had a good time.

Comments: Anthony Quayle (1913-1989) was a British stage and film actor and theatre director. His family lived in Southport. Aggie was his maternal grandmother. At the time of this extract from his autobiography he was aged around eight.

Text: Thursday, February 10th, 1972
Assembled for an all-Python writing meeting at Terry’s at 10.00. John sends word that he is ill. Extraordinarily sceptical response. However we work on, and for a laugh decided to write a truly communal sketch. Accordingly all for of us are given a blank sheet of paper and we start to write about two exchanges each before passing on the paper. After an hour and a half we have four sketches – with some very funny characters and ideas in them. They may all work if interlocked into a four-sketch mixture. Eric suggested that we all be very naughty and go to see Diamonds are Forever, the latest of the James Bond films at the Kensington Odeon. After brief and unconvincing heart-searching we drive over to Kensington – but, alas, have not been in the cinema for more than 20 minutes when the film runs down. After a few minutes there is much clearing of throat, a small light appears in front of the stage and a manager appears to tell us that we are the victims of a power cut (this being the first day of cuts following four weeks of government intractability in the face of the miners’ claim). For half an hour there is a brief, British moment of solidarity amongst the beleaguered cinemagoers, but, as we were shirking work anyway, it looked like a shaft of reprobation from the Great Writer in the sky.

Comment: Michael Palin (born 1942) is a writer, television presenter and member of the Monty Python’s Flying Circus television comedy team. The other members of the team referred to here are John Cleese, Terry Jones and Eric Idle. The coal miners’ national strike ran from 9 January to 25 February 1972. Power cuts were introduced to conserve electricity.