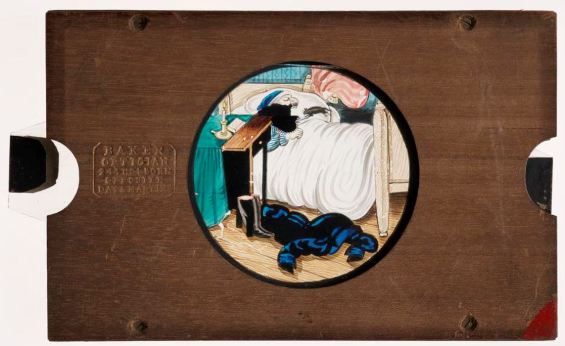 Text: As I walked in the bazaar, I came upon a crowd, one minute attentively silent, the next merrily talkative. I pushed among them, and found an exhibition of the magic-lantern kind: in light, colouring, and motion, it was exceedingly well managed. The representations were combats between natives and English; now groupes [sic] of horsemen, now of foot; now a single combat. The showman explained every scene, with many coarse jokes which I could not understand, but which took vastly with the crowd. The British were always beaten, especially in the horse-encounters, and their figures and dress were much caricatured. Had I been known, I should perhaps have been insulted, but with my hat over my eyes, and a handkerchief held generally to my face, I was probably taken for a half-cast [sic] Christian. Fruits, sweetmeats, sherbet, arrack, and toddy, were selling every where. In many places were large shallow pits filled with fires, round which circles of Moors brandishing their naked swords, danced a sort of war-dance in honour of the victorious Ali; singing and shouting at every pause “Ali, Ali!” Occasionally too, one or other of them leaped into and through the fire with looks and gestures half frantic. Walking on, you will see at the corner of one street tumblers, at another dancing-girls; here singers and music, there a story-teller with a party squatted round him. In short, everything wore a festive pleasure-seeking air; and, in spite of the difference of climate, religion, laws, and education, we find the materials in which the heart of man seeks the coarse gratifications suited to it in its natural state, are pretty much the same all over the world.

Comments: Joseph Moyle Sherer (1789–1869) was a British soldier, novelist and travel writer. He was stationed with his regiment in Madras from 1818-1823 and his sketches of India, published in 1821, went through several editions. The scene depicted took place near the British military station at Gooty in Andhra Pradesh.

Text: The motion picture art can portray any miracle. From the impressive visual standpoint, no marvel is barred to trick photography. A man’s transparent astral body can be seen rising from his gross physical form, he can walk on the water, resurrect the dead, reverse the natural sequence of developments, and play havoc with time and space. Assembling the light images as he pleases, the photographer achieves optical wonders which a true master produces with actual light rays.

The lifelike images of the motion picture illustrate many truths concerning creation. The Cosmic Director has written His own plays, and assembled the tremendous casts for the pageant of the centuries. From the dark booth of eternity, He pours His creative beam through the films of successive ages, and the pictures are thrown on the screen of space. Just as the motion-picture images appear to be real, but are only combinations of light and shade, so is the universal variety a delusive seeming. The planetary spheres, with their countless forms of life, are naught but figures in a cosmic motion picture, temporarily true to five sense perceptions as the scenes are cast on the screen of man’s consciousness by the infinite creative beam.

A cinema audience can look up and see that all screen images are appearing through the instrumentality of one imageless beam of light. The colorful universal drama is similarly issuing from the single white light of a Cosmic Source. With inconceivable ingenuity God is staging an entertainment for His human children, making them actors as well as audience in His planetary theater.

One day I entered a motion picture house to view a newsreel of the European battlefields. World War I was still being waged in the West; the newsreel recorded the carnage with such realism that I left the theater with a troubled heart.

“Lord,” I prayed, “why dost Thou permit such suffering?”

To my intense surprise, an instant answer came in the form of a vision of the actual European battlefields. The horror of the struggle, filled with the dead and dying, far surpassed in ferocity any representation of the newsreel.

“Look intently!” A gentle voice spoke to my inner consciousness. “You will see that these scenes now being enacted in France are nothing but a play of chiaroscuro. They are the cosmic motion picture, as real and as unreal as the theater newsreel you have just seen – a play within a play.”

My heart was still not comforted. The divine voice went on: “Creation is light and shadow both, else no picture is possible. The good and evil of maya must ever alternate in supremacy. If joy were ceaseless here in this world, would man ever seek another? Without suffering he scarcely cares to recall that he has forsaken his eternal home. Pain is a prod to remembrance. The way of escape is through wisdom! The tragedy of death is unreal; those who shudder at it are like an ignorant actor who dies of fright on the stage when nothing more is fired at him than a blank cartridge. My sons are the children of light; they will not sleep forever in delusion.”

Although I had read scriptural accounts of maya, they had not given me the deep insight that came with the personal visions and their accompanying words of consolation. One’s values are profoundly changed when he is finally convinced that creation is only a vast motion picture, and that not in it, but beyond it, lies his own reality.

Comments: Paramahansa Yogananda (1893-1952) was an Indian guru, renowned for his 1946 book Autobiography of a Yogi through which he spread the idea of yoga and meditation worldwide. This distinctive memory of cinemagoing comes from the First World War period, when he was living in India. Maya means ‘cosmic delusion.