Text: At dinner, some printed notices laid by our plates reminded us that the kinematoscope was at work in the town, showing in several separate scenes the fight between Fitz-Simmons and Corbett. Wishing to see how such exhibitions in America compared with those at home, I took a seat, perhaps rather too near the screen, and witnessed the struggle between the two athletes. The flicker was unpleasant throughout, which means that somehow or other more pictures should be thrown on the screen per second; and what is more trying to the eyes is the want of correct register in successive views, which causes the whole view on the screen to wobble up and down through a small distance, perhaps two or three inches. This often made it impossible to follow any rapid action, and I should think might be partly due to the nature of the film on which the pictures are taken. On the whole, I do not think this particular show was nearly so good as the “Biograph” entertainment in London.

One thing interested me a good deal. I noticed that a man sitting next to me viewed the pictures through two small holes, cut out in a sheet of dark-coloured paper. He told me it notably lessened the flicker. I tried the plan, and found it work, as my informant said: but it cut off too much light to my mind, so I did not use it long. Several of the scenes which happened just after the wrestling were shown. A man passing in the foreground looked up for an instant towards the audience with a tragically woe-begone expression, whilst the conductor or expositor, whichever he should be called — simply remarked, “That is Mr. So-and-so; he has just lost 70,000 dollars!” Perhaps that is not the exact sum mentioned; in any case it was large enough to provoke most unfeeling mirth on the part of the spectators.

Comments: Thomas Cunningham Porter (1860-1933) was a British physicist and Eton schoolmaster, member of the Royal Astronomical Society and the Physical Society of London. The world heavyweight boxing championship between James Corbett and Bob Fitzsimmons was held at Carson City, Nevada on 17 March 1897. The full fight was filmed by the Veriscope company using a 63mm-wide film format and was widely exhibited, the full film being 11,000 feet in length and lasting around an hour-and-a-half. There was no projector called a ‘Kinematoscope’. The screening took place in Colorado. 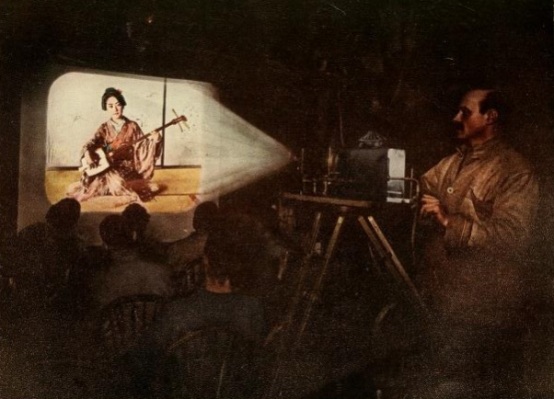 Text: Monday, May 29. – … Lecture – Japan. To-night Ponting gave us a charming lecture on Japan with wonderful illustrations of his own. He is happiest in his descriptions of the artistic side of the people, with which he is in fullest sympathy. So he took us to see the flower pageants. The joyful festivals of the cherry blossom, the wistaria, the iris and chrysanthemum, the sombre colours of the beech blossom and the paths about the lotus gardens, where mankind meditated in solemn mood. We had pictures, too, of Nikko and its beauties, of Temples and great Buddhas. Then in more touristy strain of volcanoes and their craters, waterfalls and river gorges, tiny tree-clad islets, that feature of Japan – baths and their bathers, Ainos, and so on. His descriptions were well given and we all of us thoroughly enjoyed our evening.

Tuesday, August 22. – I am renewing study of glacier problems; the face of the ice cliff 300 yards east of the homestead is full of enigmas. Yesterday evening Ponting gave us a lecture on his Indian travels. He is very frank in acknowledging his debt to guide-books for information, nevertheless he tells his story well and his slides are wonderful. In personal reminiscence he is distinctly dramatic he thrilled us a good deal last night with a vivid description of a sunrise in the sacred city of Benares. In the first dim light the waiting, praying multitude of bathers, the wonderful ritual and its incessant performance; then, as the sun approaches, the hush – the effect of thousands of worshippers waiting in silence – a silence to be felt. Finally, as the first rays appear, the swelling roar of a single word from tens of thousands of throats: ‘Ambah!’ It was artistic to follow this picture of life with the gruesome horrors of the ghat. This impressionist style of lecturing is very attractive and must essentially cover a great deal of ground. So we saw Jeypore, Udaipore, Darjeeling, and a confusing number of places – temples, monuments and tombs in profusion, with remarkable pictures of the wonderful Taj Mahal – horses, elephants, alligators, wild boars, and flamingos – warriors, fakirs, and nautch girls – an impression here and an impression there.

It is worth remembering how attractive this style can be – in lecturing one is inclined to give too much attention to connecting links which join one episode to another. A lecture need not be a connected story; perhaps it is better it should not be.

Comments: Robert Falcon Scott (1868-1912) was a Royal Navy officer and explorer, who led the British Expedition to the South Pole on the Terra Nova and died on the return journey. The expedition included a photographer and cinematographer, Herbert Ponting (1870-1935). During the winter months when there was no sun at the Antarctic various entertainments were put on for the expedition members in their hut at Cape Evans. These included regular lectures given by Ponting, using a magic lantern and photographs taken by him from around the world (Ponting had been on photographic assignments to Burma, Korea, Java, China, India and Japan). Scott’s journal makes several references to these lectures, as well as to Ponting’s photographic and cinematographic work. Ponting did not exhibit his films to the expedition as he did not have a projector not the mean to process prints from his negatives.

Text: ‘Hale’s Tours of the World,’ in Oxford Street, hard by Messrs. Gilbey & Co.’s Pantheon, are at once the oldest-established and the most educative of all London’s picture shows. Nothing approaching them has in our day been designed or so effectively carried out. Time was when Hamilton’s Diarama’s were all the rage; these have no worthily supplanted them. Seated in a veritable Pullman car, which appears to be travelling on the ever-present metals through mountainous scenery, over bridges, across vast prairie lands, or Eastern deserts, as the case may be, the illusion is perfect. Not the slightest suspicion of cinematograph lantern rays have the quasi-travellers, for the reason that the views are thrown on the screen from a great distance behind … The conductor of the Pullman Car, who snips the tickets, lectures pleasantly all the time, though in the darkness he remains unseen. Moreover, throughout the imaginary journey, the travellers are treated to pervading sounds as well as sights. The shrill whistle of locomotive and steamboat, the fearsome syren [sic] of an ocean greyhound, the roar of falling waters or tossing sea waves, the pattering of rain, the rolling of thunder, and the shouts of people add a keen zest to the excursion. From a chat with Mr S.B. French, the Secretary, we learned that his company have a contract with the New South Wales Government for the regular supply of films, and also that their operating representatives enjoy a free run on the great American railroads, and on certain British railway systems.

Comments: Hale’s Tours of the World was an entertainment which placed the audience in a replica of a railway carriage, with a film taken from the front of a moving train projected onto a screen at the front of the carriage. The carriage rocked to and fro, there were sound effects, and the conductor served a lecturer to explain the films and the experience. It was invented by the American George Consider Hale and the first Hale’s Tours in Britain opened in London’s Oxford Street in May 1906. It was arguably the first cinema in London (the Daily Bioscope near Liverpool Street station opened the same month), hence the reference to it being the ‘oldest-established’ of London’s picture shows.