Text: The Easter novelty at the “home of mystery” in Piccadilly is an exhibition of Mr R.W. Paul’s latest development of the results of continuous and instantaneous photography, whereby animated pictures from scenes of everyday life are thrown upon a screen. Mr Nevil Maskelyne acts as lecturer, and in a brief introduction recounts the history of the ancient zoetrope, or wheel of life. Similar in principle to the zoetrope was the gyroscope, exhibited sixty years since in a gallery of the Polytechnic. This was a wheel of black silhouette figures revolving before a mirror, giving the appearance of vitality. Half a century afterwards Mr Edison produced his kinetoscope – a band of progressive photographs passing before the eye of the spectator applied to an optical peephole, and creating the effects of life and motion. Mr R.W. Paul’s apparatus shows us a series of pictures of photography come to life – photography taken “in the action.” The first moving scene announced by Mr Nevil Maskelyne is a band practice. The music of the march that one may imagine is being played is given on the pianoforte by Mr F. Cramer. A number of Highland dancers are scarcely quick enough in their movements; but the remark does not apply to the graceful evolutions of a serpentine dancer or to the good-natured boxing of a couple of trained cats. The animated pictures are likely to be very popular. The interest of Mr R.W. Paul’s invention is inexhaustible, for the attraction may be revived again and again by new pictures …

Comments: Robert Paul’s Theatrograph projector first became part of the programme at the Egyptian Hall in Piccadilly, London on 19 March 1896, having made its public debut on 20 February 1896 at Finsbury Technical College. The Egyptian Hall was known for its magic shows presented by the company of Maskelyne & Cooke, where magicians David Devant and John Nevil Maskelyne were important early adopters of moving images as a public entertainment. The films named here are the Edison titles Band Drill (1894), Highland Dance (1894), a serpentine dance (there were several Edison films of serpentine dancers) and Boxing Cats (1894). The review goes on to mention the various magic arts that formed the greater part of the programme at the Egyptian Hall.

Text: A LOOK INTO THE KINETOSCOPE

[From the Boston Herald]

I you have not looked into Edison’s kinetoscope delay not but plank down your nickels and behold the wonder of the age. Verily it makes the blood run hot and cold. Edison is well named the wizard; he is the great magician of science and we have grown somewhat accustomed to his inventions through daily and constant use, but when you look into this toy that represents the work of unfathomed genius the average man believes the time has come to get excited. Nothing that I had read about the kinetoscope gave any idea of it, and it is only by personal examination that is by seeing these human pictures of absolute events for one’s self that its marvelous effect can be appreciated. The fight in the bar room, the skirt dancing at Koster & Bial’s, Sandow’s exhibition and the cats’ boxing match are as real as life. If the pictures could be on a larger scale the pleasure would be enhanced, though effect of distance does not destroy the perfection of movement or lessen any detail. The soft fluttering drapery of the dancing girl, her graceful poses and the familiar high kick, are all there, and above the sound of the electricity one can imagine the voices, the aplause [sic], the music, and also maybe the squeak of belligerent cats! It is quite possible to believe, as Mr Edison says, that the time is not far away when a grand opera can be acted and sung in a box, under our very eyes. At all events the kinetoscope will preserve what has never been preserved before save in the word painting of variable writers.

Comment: The first Kinetoscope parlour opened to the public at 1155 Broadway, New York City on 14 April 1894. The films are Boxing Cats, Sandow, Bar Room Scene and possibly Carmencita (all USA 1894). 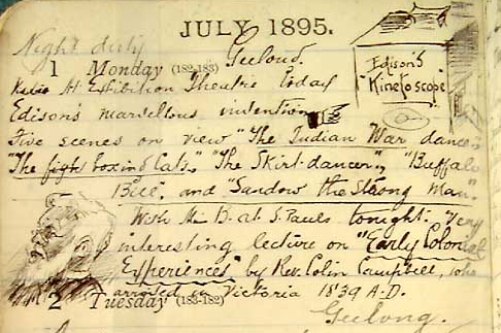 Comment: Alexander Goodall (1874-1901) was a Post and Telegraph Office clerk living in Victoria who died young of tuberculosis. His vividly-illustrated diaries, covering 1892-1897, have been made available online in facsimile form by the State Library of Victoria. This extract records his seeing the Edison Kinetoscope peepshow at Geelong. Other extracts record Goodall’s impressions of the Edison Kinetophone (combing the Kinetoscope and the Phonograph) in July 1896 and the Cinematograph in May 1897. The films referred to are Sioux Ghost Dance (or possibly Buffalo Dance) (1894), The Boxing Cats (1894), Buffalo Bill (1894), Annabelle (1894) and Sandow (1894).

Links:
Diaries of a Working Man