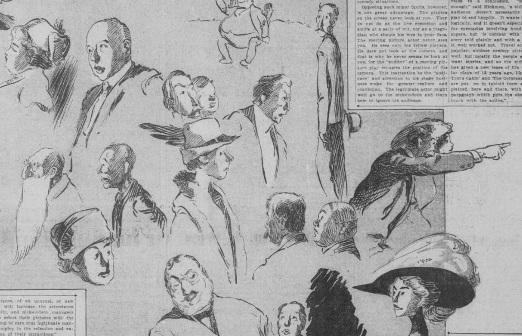 Insert from the illustration that accompanies this article, showing nickelodeon audience types, drawn by the theatre’s manager, Art Hickman

Text: A matinee audience at a nickelodeon is interesting. I noticed at the Garrick five baby buggies, three of them occupied by pretty youngsters sound asleep, and over in a dark corner the mother of another was rendering such substantial consolation as infants cry for. An invalid chair was at the end of the aisle set so that the wan occupant, while not in the way of the passerby, could still see the pictures. Hickman said, “he comes every other day.” The “audience” was quiet and well behaved. It applauded its favorites, laughed at John Bunny, was curious at the exhibition of a picture showing what a drop of water contains – mightily magnified bugs of nightmare forms. It traveled to India for 15 minutes and watched a tragedy develop to a conclusion. “Strangely enough,” said Hickman, “a nickelodeon audience doesn’t necessarily want a play to end happily. It wants it to end logically, and it doesn’t especially care for spectacles involving hundreds of supers, but is content with a quick story told plainly and with a point to it, well worked out. Travel scenes are popular; outdoor cowboy pictures go well, but mostly the people seem to want stories, and so the nickelodeon has given a new lease of life to popular plays of 15 years ago, like ‘Uncle Tom’s Cabin’ and ‘The Octoroon,’ which are put on in tabloid form and explained, here and there, with a flash paragraph which puts the observer in touch with the action.”

Comments: Walter Anthony (1872-1945) was an American journalist who went on to become a screenwriter and film title writer (The Man Who Laughs, The Cat and the Canary, The Phantom of the Opera). Art Hickman (1886-1930) was manager of the Garrick Theatre, San Francisco. He went on to become a big band leader. John Bunny was a highly popular American film comedian. This is an extract from a longer article which also covers motion picture history, production and the cinema business.