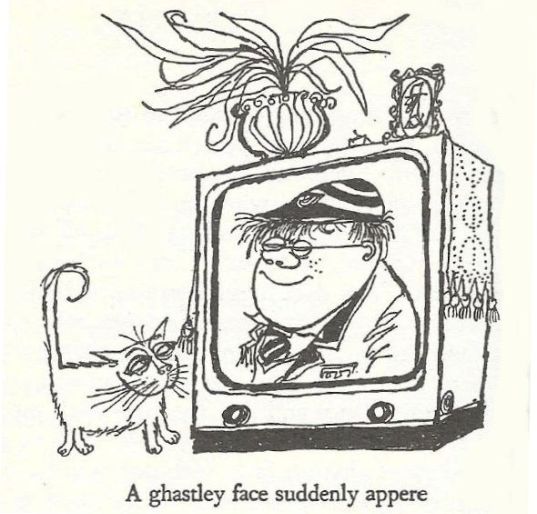 Text: Gosh super! we hav something to contend with which no other generation have ever had before i.e. the television cheers cheers cheers. Everybody know wot a t.v. is it is a square box with a screen. You switch on and o hapen, then just when you have given up hope and are going off to buzz conkers a great booming voice sa, ‘That’s an interesting point, postelthwaite. Wot does higginbottom feel? Higginbottom? ect. ect.’ It may be an interesting point but i could not care less and just go away agane when a ghastley face suddenly appere. It is worse than a squished tomato but it hold me in hypnotic trance and it is the same with molesworth 2, tho he always look dopey like that. We sit and watch more and more ghastley faces with out mouths open and even forget to chew the buble gum we are the slaves of the machine.

Of course all boys and gurls have to go through a time when there is no t.v. xcept at the postman’s down the road. Yore mater and pater then sa weedy things.

i will not hav one in the house.
the programmes are simply terible, my dear.
it is bad for children.
it destroy the simple pursuits of leisure.

Hem-hem if they only knew what the simple pursuits of leisure were like potting stones at vilage oiks or teaching parot rude words they would not hesitate for a moment. Anyway they get one in the end and sa ‘Children can only look for 1 hour at suitable programmes’ then they forget all about it until we are halfway through ‘1984’ and molesworth 2 sa ‘if that is the best a rat can do i do not think much of it.’ ‘The rat,’ i sa, ‘is exactly like thou, o clot-faced wet.’ Then mater become aware of our presence and hury the dreamy-eyed little felows up wood hill to blanket fair, as dear nana sa.

When you setle down to it this is wot hapens in your dulce domun (lat.)

Scene: A darkened room with glowing fire. Mum, Nana, me and molesworth 2 are goggling at the screen. So are the cats, dogs, rats, mice and various bugs about the place.

T.V. Are you a clump-press minder? (Grate cheers)
MATER: I thort he was an aero-dynamicist or a moulding-clamp turner……I really think……
ALL: Sshh

(Enter pater, third from the office.)

PATER: Are you looking at that friteful thing agane? Programmes are terible. Nothing to look at.

(With a roar and a ratle he put coal on the fire).

(Pater setle down. molesworth 2 aim his gat at very fat gentleman in specs. It is the same gun with which he shot mufin the mule, mcdonald hobley, a ping-pong champion, three midgets, a great-crested grebe, a persian student and lady Boyle and a budgerigar.)

MATER: Do you not think it would be better if their heads were not three feet away from their shoulders?

(Pater go and twiddle knobs. First of all there is a snowstorm then what seems like the batle of jutland, then an electronic bombardment. Finaly a vast explosion.)

MATER: You have ruined it, clot.
NANA: Boost the contrast.
MOLESWORTH 2: Adjust the definition.
ME: Oh gosh, hurry up.

(Now picture is upside down, then leaning drunkenly, then it disappear altogether amid boos and catcalls. Finaly Nana do it.)

T.V. Are you connected with seaweed? (Huge cheer)
MATER: look at tibby the cat he canot stand Gilbert Harding…..
ALL: Sssh.
PATER: He’s a guggle-gouger…..

(And so it go on. Supper is not cooked, fires go out, kettles boil their heads off, slates fall off the roof and house burn down, but we are all still looking at a nature film in w. africa chiz in fact we have seen more monkeys since we got the t.v. than ever before xcept at st. custard’s where peason have the face of a wild baboon.)

Aktually t.v. is v. cultural for boys and improving to the mind. You learn so many things than when you go back to skool all are quite surprised.

MOLESWORTH 1: To the q. whether the hydrogen bomb should be banned i give a categorical ‘no’. unless there can be international agreement to co-exist in disarmament.
MOLESWORTH 2: That is a valid point, o weedy wet. Do you kno the population of chile?
MOLESWORTH 1: No. But everyone should look both ways before crossing the road and wot can be more dramatic than man’s fight against the locust, eh?
MOLESWORTH 2: The problem of asia is the problem of over-population and now i will pla brahms etude number 765000 in F flat….

Comments: Geoffrey Willans (1911-1958) was a British schoolmaster and comic writer and Ronald Searle (1920-2011) was a British illustrator. Together they created the comic character of Nigel Molesworth, a pupil at dilapidated boys’ school St Custard’s, whose distinctively mispelt exploits were first documented in Punch magazine (from 1939) and then in four books. ‘Hee-Hee for Tee-Vee’ is the title of a chapter in the third book, Whizz for Atomms. Searle also created the rebellious girls school St Trinian’s. The BBC television production of George Orwell’s 1984 was first broadcast on 12 December 1954 and aroused much controversy for its ‘horrific’ scenes. The quiz show parodied here is What’s My Line, first broadcast by the BBC in 1951 and based on an American original. Gilbert Harding was a regular panellist on the show. Dramatic picture interference was a common experience for television audiences in the 1950s.