Source: ‘You may make mistakes even at the picture palace’, postcard, c.1910, unsent, from the Nicholas Hiley collection 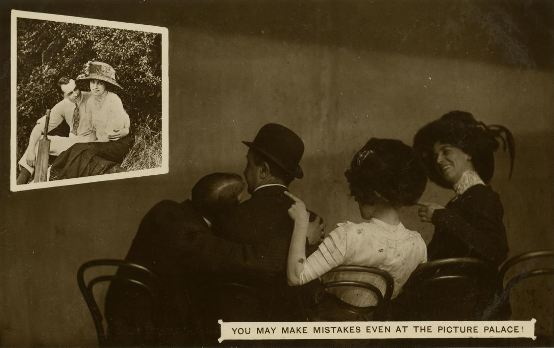 Comments: There were a number of postcards from this period which exploited the idea of the mistakes that could be made while in the dark (this is not immediately clear from the image itself, but the man embracing his male neighbour rather a female partner is meant to have occurred because of the implied darkness). This example is also typical of photographic postcards from this period which make little attempt to depict the inside of a cinema realistically.

by Luke McKernan Posted on November 22, 2014
This entry was posted in 1910s, Postcards, United Kingdom and tagged Audiences, Cinemas, Dark. Bookmark the permalink.