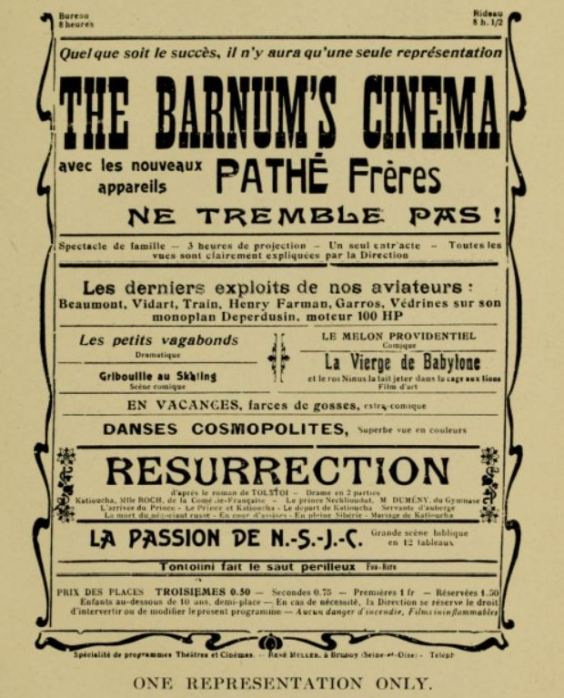 Cinema programme used as an illustration in At a French Château

Text: We were thrown into great excitement one night at dinner when the blowing of a horn and at the same time the ringing of the gate bell heralded the information that something of importance was about to take place. Ernest went on the run and soon returned with a flyer, announcing that the great success, “Barnum’s Cinema,” had arrived in town and that a performance would be given that evening, one representation only. That being the case, we could not afford to miss it, and we decided then and there to go en masse. We went early so as to get good seats, our Paris friends joining us on the way. We entered the hall, which was a very small one, its only furniture consisting of two rows of long benches, perhaps six or seven in a row. Having purchased our tickets, we appropriated to our use the three benches farthest back on the left. These seats were upholstered in black oilcloth, while others had either no covering at all or one of a very dirty and ragged coarse red-and-white cotton. The bare benches certainly did not have an inviting appearance, and the red and white were impossible; so for the time and place we felt that we had made a good choice. As yet we were the only spectators, and we now took time to examine the flimsy little slips of paper that served as tickets. To our surprise we found that some of our party had paid one-half franc, some three-fourths of a franc, some a franc, and Billie and I one franc and a half each, the ticket-seller having added in lead pencil the necessary figures to make our little yellow slips of paper of sufficient value.

However, we were allowed to sit together on the oil-cloth-covered seats, whatever the price of our tickets; and others, who came later, apparently had the like privilege of choosing of what was left, the latest comers sitting on the floor and leaning up against the bare, blank walls. I did not exactly understand their system; but it was evident that those traveling show-people were not at all particular what you paid or what seats you occupied. There was one advan[t]age, however, Billie and I had the satisfaction of knowing that we held reserved-seat tickets (there were none better), though we sat one on each side of Madame R. who had purchased a third class billet. The tickets were not demanded and I still have mine among my valued souvenirs.

Our early arrival at the show gave us an excellent opportunity to watch the country people come trooping in. They came by families, and having finally deposited themselves, awaited with expectant faces, the beginning of the great moving-picture show. There were blowzed peasants, young and old, in their coarse blue frocks and trousers, and clattering wooden sabots; fat, almost toothless and altogether corsetless old women, in their loose blouses, tied down by their coarse blue aprons; young women of generous figures, some of them rather good-looking, with babes in arms; frowzy-headed little girls, with front locks tightly braided, with perhaps a tiny, tiny bit of narrow ribbon by way of ornament; boys of all shapes and sizes, in their short socks, black cotton aprons, and wide-brimmed straw hats; and, last but not least, coquettish rusticity, revelling in the companionship of her bel amoureux, though in the eyes of the world he must appear but an “unlettered hind.” All the men, except those of our party, sat with their hats on, most of them vociferously puffing their tobacco throughout the entire performance. That they do otherwise seemed not to have been expected of them; and, as the women wore no hats, no polite invitation that they remove them was necessary. I have said that all the men except those of our party wore their hats during the performance, but that statement is not strictly true. I was pleased to see that our Ernest had not only dofifed his apron but sat with head uncovered, thus showing himself a little higher in the social scale than the gens de la campagne.

While the people were gathering, the operator, a dark, fat, greasy-looking individual, proudly marched up and down the aisles, smiling blandly upon his audience, with the air of one who is about to give them a great treat, which he is confident, must meet with their unqualified approval. His very attitude proclaimed in unmistakable words, “I would do anything for you.” Perhaps it was this attitude that gave Billie the assurance necessary to slip to the casement and swing it open, thinking that a breath of pure air would be quite agreeable and perhaps blow out a little of the smoke. But, behold! a change now comes o’er the man. With the intensest of excitement he leaps to the spot, with a “No, no. Monsieur! No, no. Monsieur!” and on the instant everything is made fast again. The windows must not be open, for there are rogues and rascals outside who might look in and get the show for nothing.

As for the show, well, it was quite like those given in America, no better, not much worse. There were the ascension of aviators, cosmopolitan dances. Biblical representations, elopements of fond lovers, with tyrannical parents, and the mischievous city kids, who go to grandfather’s farm to give their parents a rest, spill the ink on the parlor carpet, steal the jam, overturn milk pans, make bonfires of the haystacks, and let out all the live stock.

The operator seemed to think that the pictures needed a great deal of explication and kept up a flow of talk very amusing, both to those who understood and to those who partly understood. More than that he gave his opinion of what was being enacted before the eyes, and made jocular remarks concerning the deeds done on the screen, especially when they chanced to be all about love and the bel amoureux, all of which were highly appreciated by the audience. In fact, it was as responsive an audience as one often sees. Like Sir Roger de Coverly, they took the situations seriously and applauded where they approved, and talked over the scenes presented as though they were a part of real life. In fact all through the performance they discoursed with each other audibly.

One novel feature was an intermission of ten or fifteen minutes when the performance was about half accomplished. At this time a man smoking a cigarette passed through the hall selling little favors done up in twisted papers and loudly bawling out an urgent invitation for people to buy. It was then that I noticed for the first time our blanchisseuse in clean blouse and apron, looking radiantly happy. Then, too, that there might be no cessation of entertainment, a ruddy-faced old rustic, in clumsy wooden shoes, took it upon himself to get merry and jump over one of the benches. A roar of laughter rewarded the old chap for his pains. The Château party ate French lemon drops and peppermints from paper bags, and breathed deeply of the fresh air that was then entering, for during the recess there was no objection to open doors and windows.

The show lasted something over two hours. Even the franc-and-a-half people had had their money’s worth. Disregarding the Cinema, the real enjoyment had come from seeing the peasant class at a show. That was a novel experience and worth the price. As I went out the door, the ticket-seller said to me, “C’est bon, n’est-ce pas, Madame?” And I answered, “Oui, Madame, très amusant” using the same phrase that Mademoiselle L. had used in speaking of Billie. This seemed to give such entire satisfaction that I couldn’t help feeling quite a bit of pride in my proficiency in the French tongue.

Comments: Miriam Irene Kimball was an American teacher who spent the summer of 1913 at a chateau at Soisy-sur-Seine in France and produced a privately-printed account of her experiences, from which the above extract is taken. ‘Barnum’s Cinema’ would have had nothing to do with the deceased American impresario P.T. Barnum, except through appropriating his name to denote glamour. The programme reproduced in the book is curious, as the films it announces are from widely different dates, and it has some English text. It may not be genuine.