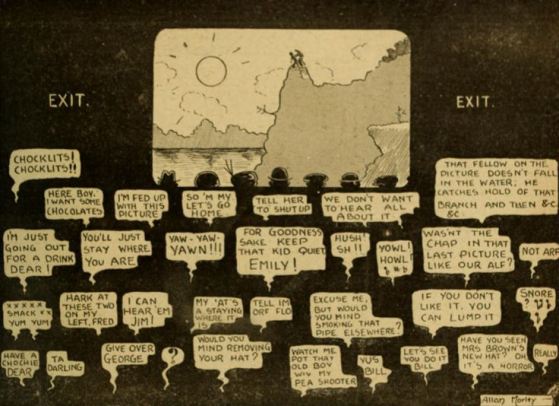 Comments: Allan Morley is probably the comic artist of that name (1895-1960) who worked for DC Thomson magazines from the 1920s to the 1950s, including work for such children’s comics as The Beano and The Dandy. The legend that accompanies the cartoon reads: “Pictures are often amusing, but the conversations of picturegoers are very often more so. Our cartoonist presents a sample of what he has overheard at sundry cinemas”. The use of speech bubbles to reveal the conversations of a film audience in the dark is also employed in the postcards ‘The Bioscope‘ and ‘In the Cinema‘ previously featured on this site. Pictures and the Picturegoer was a British film trade journal. My thanks to Maria Velez for having first tweeted this image.